There has been a turn for the better in the Finnish economy after a long wait. The improvement already started at Jame-Shaft by the end of last year, with the situation improving significantly in the metal industry since the spring and summer. The only thing slowing down the growth is really, insufficient capacity. Investments in various metal workshops have stayed at a low level for a long time and, therefore, the required capacity, i.e. what we had in 2008, cannot be reached. However, machine investments have started again, but it will take some time before the new machines are up and running.

Big thanks to all of you who visited our stand at the Tampere Subcontracting Trade Fair. It was nice to see you all again and exchange pleasantries. Significant items that came up in the discussion were, for example, decreased availability of raw material, rising prices and the difficulty of recruiting new staff. It’s been difficult to get rare materials, particularly concerning hollow bars. The longer than usual delivery times from steel factories are also causing problems. We, in turn, need to buy the raw material even earlier, and based on somewhat uncertain forecasts. The steel factories’ mutual concern seems to be the availability of electrodes used in melting steel as well as the prices that have multiplied. The reasons behind this are political, mostly to do with the U.S.A. and China securing their own advantages.

Our past year has been very busy, mostly due to significant growth in spring 2017. We had estimated a turnover of 11,2 M€ for the accounting period that ended in June 2017, but we exceeded it by two million and the turnover rose to 13,1 M€. The whole increase of 2 M€ was generated during the six-month period between January and June 2017! Because no indicators or prognoses could predict this growth, we couldn’t prepare ourselves for the increased demand beforehand, so all the necessary actions had to be taken under a great deal of pressure. For the current accounting period, we have estimated sales of 16 M€, and, actually, we are well within that target after the first quarter. Thanks to increased capacity, our delivery certainty has gradually improved. 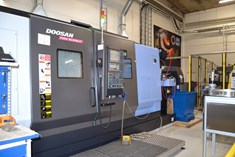 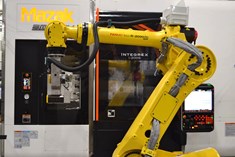 The two most important actions we have taken in order to increase capacity, have been employing new people and making new investments in machines. As a matter of fact, our personnel have increased by 25 people since the beginning of the year. The increase is significant for a company of our size, given the fact that we were 52 people altogether at the end of last year. We are still a few people short for the new machines that are on their way. So far, we have received four new turning machines, two of which are so called multipurpose turning machines. The biggest individual machines that are yet to be delivered are one large multipurpose turning machine and one horizontal machining centre. Their delivery times are long, but we should have the multipurpose turning machine by the end of the year, whereas the machining centre should be delivered in January 2018. These new machines will provide us with a substantial increase in capacity from early next year. After this, there is a plan in place to increase the capacity of grinding, but, at the moment, we have nothing further to tell you about this development.

In addition to machine investments, we have also focused on developing systems. The ever-increasing volumes and new turning machines require even better tools for controlling the production process. For that reason, it is imperative to reorganize the work in the factory so that the new machines and methods are utilized to the best possible advantage. Due to new staff, we have more departmental meetings in the factory so as to ensure that everybody is familiar with the new machines and methods. Moreover, we have placed tv screens in the factory where important information is displayed. Even though we have been really busy, we have still implemented the ISO 18001 occupational health and safety management system. Also, ISO 9001 and ISO 14001 have now been certified to the latest (2015) standard.

We wish all our customers a successful autumn. Let’s hope that the positive trend in the market continues and we can all enjoy the product of our work.

This website uses cookies to improve your experience while you navigate through the website. Out of these, the cookies that are categorized as necessary are stored on your browser as they are essential for the working of basic functionalities of the website. We also use third-party cookies that help us analyze and understand how you use this website. These cookies will be stored in your browser only with your consent. You also have the option to opt-out of these cookies. But opting out of some of these cookies may affect your browsing experience.
Necessary Always Enabled
Necessary cookies are absolutely essential for the website to function properly. This category only includes cookies that ensures basic functionalities and security features of the website. These cookies do not store any personal information.
Non-necessary
Any cookies that may not be particularly necessary for the website to function and is used specifically to collect user personal data via analytics, ads, other embedded contents are termed as non-necessary cookies. It is mandatory to procure user consent prior to running these cookies on your website.
SAVE & ACCEPT
Scroll to Top